A while back when I was reviewing some code, I spotted a custom Java Exception written like this.

public class PersistenceException extends Exception {
}
This code will compile and even work, but would you write a custom Exception like this ? Would you add anything to this class, if you were writing it ? I think I would, but let's first see what we can do with this class as it is.
Typical client code which uses it would look like this.
throw new PersistenceException();
That's great, but what if I want to supply a message with the custom Exception, or what if I want to supply a cause, or maybe a message and a cause. The simple Exception class we showed above will not work for any of these complex scenarios.
Someone remarked "maybe the developer who wrote this was lazy". Well IMO there is nothing wrong with laziness. A good programmer is supposed to be lazy. Lazy programmers hate repeating the same thing over and over again, so they will often write a generic, reusable classes (or functions, or modules), which they can reuse from different parts of their code. Lazy programmers also create utilities to automate their tasks. Laziness is not necessarily bad - as long as it does not degenerate to sloppiness. Much can be said about sloppy programming, and the example I have shown above is possible like a small ripple compared to the sloppiness that is possible. But I digress - laziness or sloppiness is not the purpose of this post.
Coming back to custom Exceptions, lets turn to Eclipse and see what it generates when we create a new subclass of java.lang.Exception, using it new class wizard. Notice the red arrow, because without checking the "constructors from superclass" option, you will get the exact code shown above. 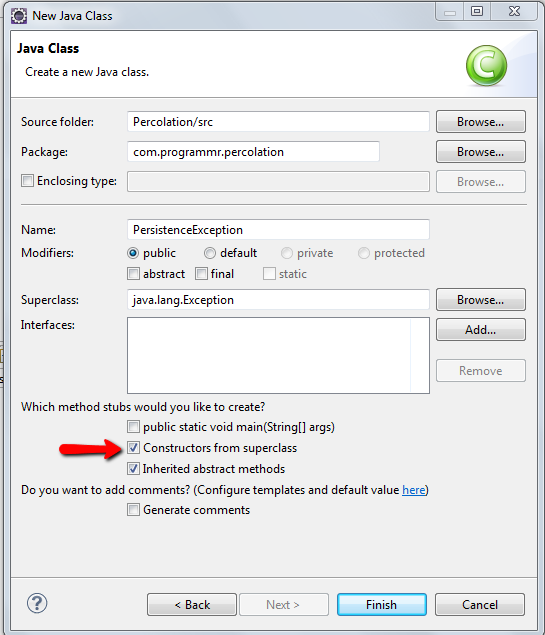 }
I love this, because now I can write far more richer client code. I can add a message to the Exception -
String msg = "Cannot connect to data store"
throw new PersistenceException(msg);
or a cause -
try {
writeData(d);
} catch (FileNotFoundException fnfe) {
throw new PersistenceException(fnfe);
}
and even a message with a cause -
try {
writeData(d);
} catch (FileNotFoundException fnfe) {
String msg = "Cannot connect to data store"
throw new PersistenceException(msg, fnfe);
}
We can never know how a custom Exception will be used by it's clients, and it's best we do not try to guess (in this case) either. The best way to create a custom Exception is to always override all four methods from java.lang.Exception.
Technical Word Power
Before we say goodbye we would like to upload a technical word to your memory. Do you know what the term orthogonal means in Computer Science ?
Orthogonality is the property that means "Changing A does not change B". An example of an orthogonal system would be a radio, where changing the station does not change the volume and vice-versa. You can read more about orthogonality on Wikiedia. This thread on Stack Overflow also explains orthogonality with real world examples in the context of software development.